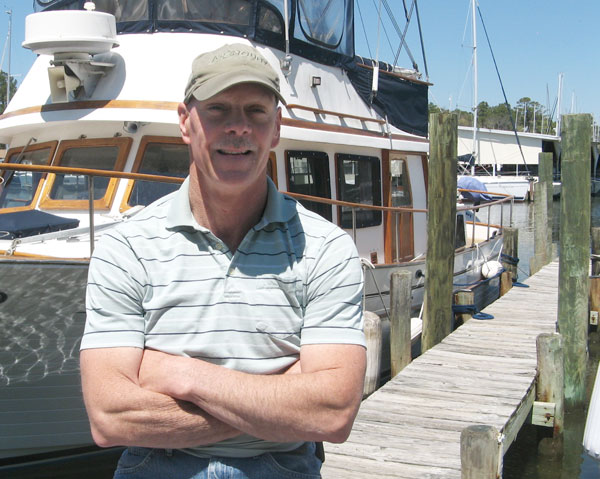 RMC Marine is a mobile marine service for power boats and sail boats. From difficult engine rebuilds to basic annual services, RMC Marine has the experience and certified technicians to get the job done right.

Reid Conley, Owner of RMC Marine, brings more than 35 years of experience working in the marine services industry. He specializes in Mercury engines and Outboard services. He was a Mercury outboard dealer and certified Mercury tech for 23 years.

Reid loves motors and all things mechanical, an interest that sparked as a kid while helping his father fix old automobile engines. He grew up in a New England sailing family and at the age of 8 was introduced to sailing on a W. Scow. As a teenager and young adult Reid raced Thistles, Lasers and International 14 sailboats. He has sailed professionally as crew in the Newport to Bermuda Race, Marblehead to Halifax, and numerous other major racing events. He was a member of the support crew for the 1980’s Americas Cup Freedom Campaign. Reid’s lifelong love of sailing gives him a personal understanding of the needs of sailors and their sailboats.

That is not to say that sailing is Reid’s only boating preference. He also loves to go fast, and is one of those rare birds that enjoys both sailing and power boating. He has just as much experience with power boats and power boat racing, including owning a Cigarette Boat for a time.

What began as a dual passion for engines and boating has grown into a professional career spanning 35 years. Prior to starting RMC-Marine, Reid brought his mechanical skills to Coastal Marine, LLC in 1995. He has worked in a variety of marine service businesses, including 4 years as a Rigger at Brewer Yacht Yards in New England. After working as the Yard Manager at Coastal Marine for 10 years, Reid purchased the business and boatyard from the previous owner in 2005 and provided marine services to Deltaville for more than 13 years. He closed the boat yard business in September of 2018, but that hasn’t ended his love of fixing boats and engines. Reid is excited to bring his skills to boaters needing marine services.

The mix of mechanic, sailor and power boater is what makes Reid so good at helping Chesapeake Bay boaters with the care and repair of their boats. When not working on engines, Reid enjoys gardening at home, and hiking in the Shenandoah National Park.